Mr. Mike Kelley had shown an interest in agricultural operations at a young age. As time went by, he followed his passion and started an agricultural business while in High School.  Over the years, Mike perfected his skills at land grading, turfgrass production, fruit and vegetable cultivation, ornamental plant and tree production, commercial-scale irrigation, and raising beef cattle.  All these activities were born out of a keen awareness of the end goal, and as such, he perfected many aspects of agricultural production that ranged from tilling and grading the soil to soil amendments to efficient irrigation techniques to genetic selection of plant varietals and efficient harvesting of the crop production.

Mike had owned and operated his own business for over 30 years before applying his extensive know-how to the Cannabis sativa plant. First, in the realm of Industrial Hemp where beginning in 2014, he was the Director of Agricultural Operations for GenCanna in Kentucky. There he successfully led the effort to cultivate the first large scale grow of over 600 acres of Industrial Hemp, amounting to over 2 million pounds of dry biomass while overseeing the expansion of 1,000’s of acres with partner farms throughout Kentucky as the industry started to grow.

This success led him to apply his skills in the Medical and Recreational Marijuana space first in southern California, then leading a team that harvested the first major outdoor Cannabis sativa crop in Nevada. In 2018 Mike formed Sunshine Hemp and was awarded the first Florida hemp seed pilot program permit through FAMU due to the highest score on the application for the program. While working as the CEO with Sunshine Hemp, he also former AM Hemp in 2019 and successfully set-up a new 1,000-acre hemp farming venture in southwest Kentucky that yielded over 4-million pounds of CBD dominate biomass. Furthermore, in his role in Kentucky with Industrial Hemp, he applied his well-rounded skills in integrating industrial-scale processing equipment, thus leading to the success of GenCanna in their production of cannabidiol (CBD) isolate. 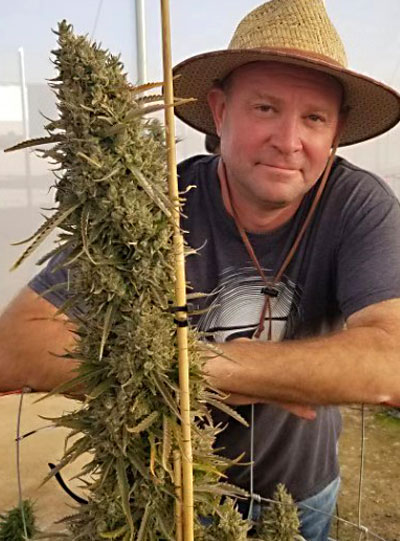 Mr. Douglas Warren has been involved with agricultural operations since a young age starting out working on his parent’s and grandparent’s organic vegetable and livestock farms. As time went by, he followed his passion and started an organic fertilizer business that leads him to be involved in the hemp and marijuana space. His career path included starting and operating an outpatient physical therapy clinic for over 13 years while also working as an independent insurance adjuster.

Over the years, he perfected his skills at project management while working as a large loss and complex liability independent insurance adjuster for almost all of the large carriers across the country while managing 30 to 40 files on average with one million dollars and up losses. As part of the demands of managing commercial insurance losses, he dealt with engineers, contractors, attorneys, code officials and material manufacturers to determine the extend of the losses, repairability, reasonable repair cost, local building codes and coverage provided under the insured’s policy while maintaining detailed status reports that include payment recommendations supported by thorough investigation and supporting documentation.

Even though this phase of his career that required extensive travel over the last 20 years, Douglas never lost his interest in agriculture born through his Midwest upbringing and deep family ties to the land. All of these activities were born out of an internal self-motivated drive for success and eye for detail. He perfected many aspects of project management and agricultural production that ranged from sourcing materials economically for large scale operations and broad knowledge of farming techniques in multiple climates. He had owned and operated his own business for over 20 years before he applied his extensive know-how to the Cannabis sativa plant.  First, in the realm of Industrial Hemp where beginning in 2015, he was the Assistant to the Director of Agricultural Operations for GenCanna Global in Kentucky. There he successfully aided in managing and problem-solving in all aspects of cultivation, harvesting, and processing hemp while running special projects for future expansion.

In 2017 he was the project manager over a 12-acre outdoor grow in southern California in the Medical Marijuana space that included preparing raw land, setting up all infrastructure, and working with a Native American tribe to write and implement regulations on tribal ground. This success led him to apply his skills in the Recreational Marijuana space leading a team that successfully set up and executed the first outdoor Cannabis sativa crop in Nevada and is currently the operations consultant over this operation to date. Furthermore, in his role in Kentucky, California, and Nevada with Industrial Hemp and Marijuana, he applied his well-rounded skills in project management to lead a team of over 100 persons to create and refine a farming model that can be duplicated with proven success. As of 2019, Douglas joined Sunshine Hemp as the COO, where he is overseeing hemp strain research, setting up an in-state breeding program and sales.

Dr. Jeffrey Sharkey, Partner and Director of Regulatory Compliance – As a Partner in Sunshine Hemp, Dr. Sharkey’s role will be to ensure that all of the company’s activities are in strict compliance with state and federal laws regarding Industrial Hemp. Dr. Sharkey has over 30 years of government advocacy experience in addition to 8 years of employment at senior positions in the Executive and Legislative branches of Florida Government. In addition, Dr. Sharkey has been directly involved with the drafting and passage of both the 2017 “Industrial Hemp Research Pilot Project” legislation, and the 2019 “State Hemp Plan” legislation. He works closely with the Florida Department of Agriculture and Consumer Services on all aspects of Florida’s new hemp program. He is the founder of the Florida Hemp Association, a statewide advocacy group to promote hemp in Florida.